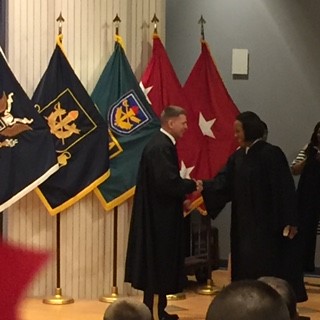 I am nominating United States Army Colonel Tyesha Lowery Smith for the Black Women Leader Award. Tyesha is a woman of color (African-American/Black) who uses her voice to literally Raise the Bar for black women to be seen heard and valued. She was promoted in July 2021, to serve as the first United States Army Deputy Chief of the Trial Judiciary to Colonel Tim Hayes, the Chief Trial Judge. In March 2022, after serving three years, Col. Hayes will transition to his new assignment as the Senior Appellate Military Judge, Army Court of Criminal Appeals.