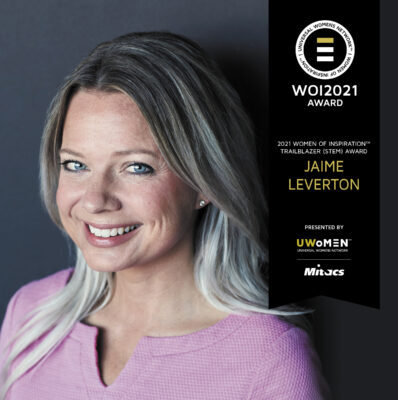 Jaime Leverton has spent her career leading strategic transformations at some of Canada’s top technology companies. For two decades, she has championed a similar transformation for our national tech industry as an advocate for elevating both the position of women in STEM industries and of Canadian innovation globally.
Over the last 20 years, Jaime has demonstrated her ability to effectively lead and transform organizations at pivotal moments through roles at IBM, Bell, BlackBerry, National Bank of Canada, and Cogeco Peer 1, all culminating in her current role at Hut 8 Mining.
Today, as CEO of Hut 8 Mining, one of North America’s oldest and largest digital asset miners, Jaime is one of the youngest women leading a publicly-traded company in Canada within a tech segment marked by an acute lack of gender diversity and has kept her commitment to supporting other women at the forefront of her leadership approach.