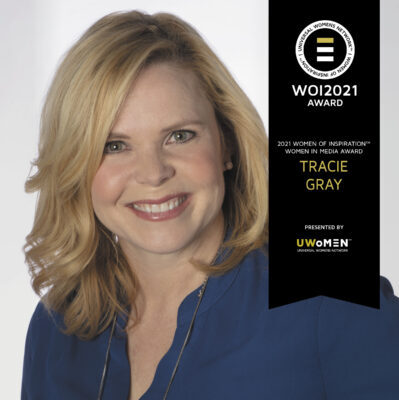 Tracie Gray is an Influencer & a true Woman of Inspiration. Known for her infectious smile & magnetic personality, she can light up any room. Tracie is skilled in Announcing, Acting, Voice Overs, Commercials, Public Speaking, Television, Radio, Writing, Film, Stand-Up Comedy & Master of Ceremonies.

Tracie’s #1 passion is her family, she is a loving wife to her husband, Devin, & Mother to her 2 sons, Dylan & Anson.

Her 2nd passion is her work. She starred in her first TV commercial at just 3 years old & started in radio at 15. Her extensive media & broadcasting career includes co-hosting a Radio Morning Show, host & producer of her own Movie Review, a Helicopter Traffic Reporter & hundreds of TV & Radio Commercials, plus several TV shows & Movies. Tracie has done it all.

She owns companies for Professional Voice Overs, Music & Comedy Entertainment & Real Estate Investing. She also has a passion to help others, with over 200 volunteer hours every year for various charities. She was honoured with this year’s Volunteer of the Year Award from the Alberta’s Teachers Assoc.