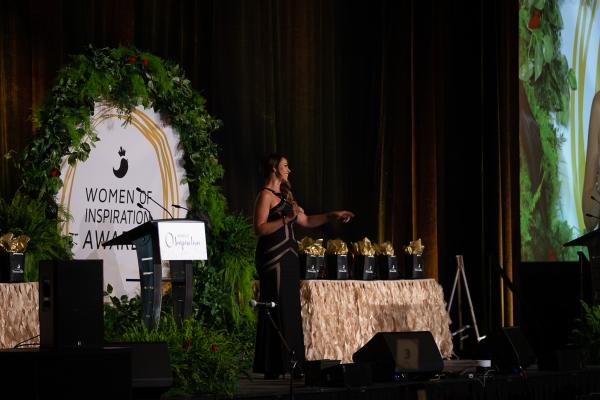 Changing the Workplace for Women One Award at a Time

The Woman of Inspirations (WOI) Awards event is changing the workplace for women one award at a time. Founded by Monica Kretschmer, the awards are an extension of her two sister organization: The Nest Foundation and Canadian Business Chicks. The 2018 WOI Awards were the fourth annual awards held celebrating the accomplishments of remarkable women who stand out. Meet out 2018 Women of Inspiration Award Winners.

Be they women who are in the trenches or women who are leading the pack, so to speak, these awards help put the spotlight on the talent and the over-the-top achievements of Canadian women within Canada and around the world. Further to this, the Woman of Inspiration Awards are attracting the attention of governments at the municipal, provincial and national level. In that light, a provincial government grant in the amount of $50,000 will contribute a portion of the much needed financial help to host the first conference hosted by The Nest Foundation to be held in June 2019.

The Canadian Business Chicks SupportHER Program launched in the spring of 2018 is gaining popularity with the corporate community. C-suite members have been consistent in their response to SuppotHER remarking that the program is giving them the vehicle and the tools needed to recognize women in their company and give them meaningful acknowledgment. With a 900% increase in the number of men in the room at the Awards, the momentum for support is growing. Twenty-five percent of the audience was male. Become a SupportHER.

The WOI Awards Program began in 2015 with a single award to honour one woman, Diane L. Harms. With the 2018 awards gala, nearly 40 women have been named Women of Inspiration across Canada.

The atmosphere in the Telus Convention Centre this past September 20th was filled with reverence, joy, sincerity and hope. The thank yous declared at the podium by the award recipients were sometimes accompanied with tears. A number of them echoed each other that women look forward to participating in more inclusive workplace practices. They described the advancement that women are seeking includes a stronger presence in matters of decision making, and increased opportunities for leadership with the emphasis being on participating. The award winners advocated consistently for a collaborative work environment. They see men and women working together as being the best choice for the future for promoting success.

Readers are invited to participate in the nomination process by submitting nominations for themselves or for someone deserving. Is there a Woman of Inspiration on your team? Is there a woman in your circle of influence who you feel ought to be acknowledged internatinally? The WOI Awards are open to Canadian women all accross Canada.

The 2019 nominations will open in January. The depth and breadth the of descriptors of the women in each of the nomination categories gives women lots of room to shine.