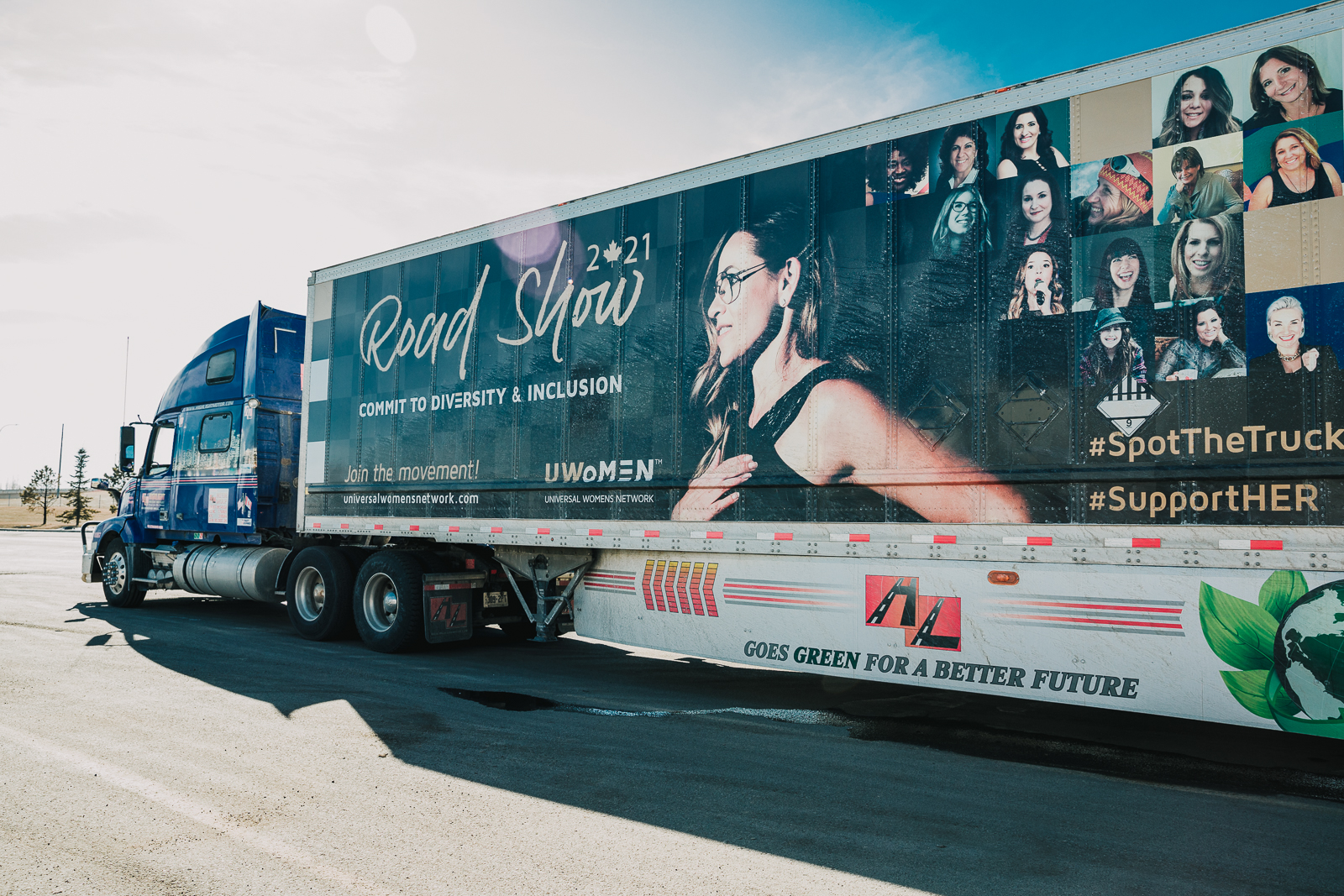 Tuesday, April 13, 2021 – Calgary AB – Universal Womens Network™ (UNW) is proud to announce that they have partnered with the Canadian Transportation Industry, and aligned companies committed to Diversity and Inclusion, to launch the Women Driving Change initiative across North America.

On March 8th, a fleet of semi-trailer trucks wrapped with the faces of diverse leaders from industries where women are under-represented in the workforce hit the road from their Mississauga, ON depot to travel across North America as part of a moving billboard campaign. The spring and summer initiative will lead into the campaign’s Spot the Truck Fall Road Show. Universal Womens Network™, along with Penner International Inc, Highlight Motor Group Inc, and Maritime Ontario, are on a mission to empower, connect, and inspire one billion women to be seen, heard, and valued!

The ongoing pandemic demonstrated the strain many women face as primary caregivers for family, young and old, while balancing careers, and running their businesses. Further, it illuminated how underrepresented women still are in many essential services and industries. But the tide is turning; the campaign hopes to raise awareness for the growing impact women are having on the economy, from running businesses and traditional careers to their emerging roles in non-traditional careers in the transportation, construction, and manufacturing industries.

“Coming out of the pandemic, we are putting women in the driver’s seat. We are creating a movement through our campaign so that more women can be seen, heard, and valued. We want to drive awareness of the diversity and inclusiveness of women, their impact and contribution to the economy, and increase the visibility of opportunities in lesser-known industries.” says Monica Kretschmer, Founder, and CEO of Universal Womens Network™ and Women of Inspiration™ Awards.

Noting that currently, only 3.5% of truck drivers are women, Kretschmer hopes her campaign will help increase their representation in the industry over the next decade, explaining, “We expect that the graphics for the trucks we completed for this Road Show will bring awareness to a situation that is too widely accepted as is, which is that the transport industry and other industries underrepresented by women are a ‘Man’s World”.

In fact, the vision for the campaign was brought to life during the pandemic as an innovative way to unite companies committed to diversity and inclusion, not only featuring women in leadership roles, on boards, in the C-Suite, and founders of women-owned and led companies, but also the SupportHER™ male allies who support the movement: “By bringing our voices together, we can change this situation for the better,” says Charles Veilleux, Vice President, Sales, and Marketing of Turbo Images, “We are proud to partner with the Universal Women’s Network™ as a visible SupportHER™ partner.”

Following the summer road trip, the ‘Women Driving Change’ campaign will then launch into phase two, with the Spot the Truck #2021Road Show campaign commencing September 9th. Kretschmer will be on the road for a 10-city tour and documentary along with Shelley Uvanile-Hesch, 2020 Women of Inspiration™ Rural Leader, and CEO of The Womens Trucking Federation. They will be driving a semi-trailer across Canada to designated cities where female leaders from diverse industries will be featured at local hybrid virtual events. Each event will feature special guests, timely panel discussions, allies, and 100 Women of Inspiration Book Contributors who will participate in a book signing to coincide with the release of the 100 Women of Inspiration™ book.

“With just one of these trucks receiving more than 16 million views a year, we are challenging businesses and individuals to take real action to become a visible SupportHER™. We invite them to Spot the Truck, participate, and nominate a Woman of Inspiration ™, so we can share the stories and voices of inspirational women. We choose to challenge everyone to play a role, to SupportHER™ and lead the way for true diversity, inclusion, and equality within their industry.” Kretschmer states.  The Universal Womens Network™ 2021 Women of Inspiration™ Awards Nominations are open 365 Days a Year.

To learn more about the #2021RoadShow campaign or to find Spot The Truck locations, please visit our @2021RoadShow and Universal Womens Network™ website.

For Media inquiries, to discuss the emerging role of women in under-represented industries, or be a part of these first-of-its-kind initiatives, please contact:

UWN ™ is a global platform committed to gender equality by raising the bar to advance women in their networks, communities, and workplaces. We connect, celebrate, and recognize women along with men who SupportHER™ to empower women to succeed personally and professionally.